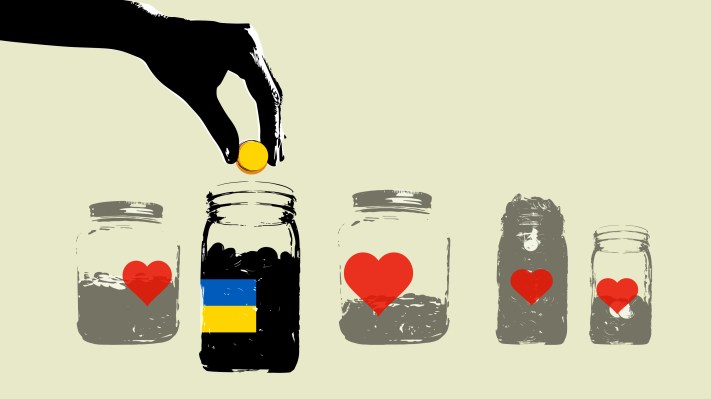 As the Russia-Ukraine war rages on, crypto has become an integral tool for donors abroad to support Ukraine. The success of crypto-native fundraising campaigns in this context is reflective of a broader trend that’s taken off in a big way this year of crypto holders giving away their coins to support charitable causes.

Charities around the globe are soliciting donations in crypto to aid Ukraine. Endaoment, a popular crypto giving platform, says it has raised over $2 million for charities supporting Ukraine since the onset of the war in late February. Another crypto nonprofit platform, The Giving Block, has also already taken in $1.5 million in crypto donations and announced a campaign yesterday to raise $20 million in cryptocurrency for its Ukraine Emergency Response Fund supporting a variety of accredited nonprofit groups including United Way Worldwide and Save the Children, according to a webpage for the campaign.

It’s not just nonprofits seeking to leverage crypto as a donation tool, though. The Ukrainian government itself has already raised over $54 million in Bitcoin, Ethereum, Tether, Polkadot, and other cryptocurrencies primarily to fund its military, according to a new website detailing its partnership with a number of major crypto exchanges. The Ukrainian government’s Ministry of Digital Transformation has spearheaded the effort to bring in donations through crypto, and the new partner companies will help convert these donations to fiat currency and send them to Ukraine’s central bank, the website says.

While the Ukraine invasion has certainly acted as a catalyst for donors to give away crypto, the mechanism surged in popularity last year across all types of charitable causes.

Endaoment, which facilitates crypto donations to any U.S.-based 501(c)3 nonprofit, saw donation volume on its platform increase 100x last year, from $253,000 to $28 million, the company says. The Giving Block, too, saw donations surge to over $69 million in 2021 – a 1,558% increase from the year prior, according to its annual report.

All of this begs the question – why are donors choosing to give away crypto instead of cash?

“If you are someone who wants to do something charitable, and you have crypto that has appreciated, that appreciated crypto is your most tax-incentivized way to give,” Duffy said.

For U.S.-based donors, there’s a key difference between giving crypto to an established 501(c)3 organization versus donating to any other cause, such as a foreign government in the case of Ukraine. The former often results in a lucrative tax benefit to the donor, while the latter does not.

Donating cash to a legally-recognized nonprofit qualifies as a tax write-off for donors, allowing them to reduce the amount of taxes they owe by the amount they give away to charity. Donating assets, like crypto or stock, can be even more beneficial than giving away cash because it provides another important tax incentive on top of the write-off.

Normally, if cryptocurrency holders sold their coins after they have appreciated in value to lock in a profit, they would have to pay up to 37% of that profit in capital gains taxes. If they donate the coins instead, they usually don’t have to pay capital gains tax at all. The dual tax incentive helps explain why crypto holders, who usually want to hold onto as much of their digital currency as possible – in hopes that it’ll continue to rise in value – are actually willing to give it away to charities instead of just donating cash.

Donor-advised funds are a popular vehicle for asset donations — they allow individuals to take an immediate tax deduction when contributing crypto, other assets, or cash to a dedicated account that can appreciate in value over time. The account holder can ultimately deploy the funds in the account to nonprofits at their discretion, and does not need to immediately use all the capital. Fidelity‘s charitable giving arm, Endaoment, and The Giving Block all offer donor-advised funds that can accept crypto.

While tax incentives can sweeten the deal for donors to give away crypto, Duffy said, it’s not the sole motivator behind crypto philanthropy. Crypto donors overall are more likely to donate larger sums than donors who give stock or cash, he added.

“If you’re in crypto, especially early into crypto, you’re probably interested in just being at the cutting edge and wanting to be a part of something that’s going to change the world,” Duffy said.

Like with most trends in the crypto space, a sense of identity and community plays a central role in driving participation. Savvy charities are leveraging this cultural phenomenon, even though most end up converting the donated crypto they receive into fiat before deploying it.

“Any nonprofit who creates a space for crypto users outperforms the others,” Duffy said.

Although some large nonprofits like Save the Children have been able to build out crypto donation programs given their resources and scale, many mid-sized and smaller charities haven’t pursued the option. Crypto donations make up a tiny fraction of charitable giving overall – U.S. charities alone received an estimated total of over $470 billion from donors in 2020, according to Giving USA.

Nonprofits may be hesitant to get involved amid concerns about crypto’s association with fraud and scams, a link that’s been noted by regulators including U.S. Securities and Exchange Commission chairman Gary Gensler. Others just don’t have the technology or infrastructure to be able to successfully support accepting donations in cryptocurrency.

Small nonprofits without a robust internet presence sometimes think accepting crypto can be a “lottery ticket” of sorts for them, Duffy said. He cautioned against this line of thinking, saying nonprofits without much of an online presence should “stick to the nuts and bolts” before building out crypto integrations.

Crypto giving wasn’t just limited to coins, though – charitable NFT projects also gained traction among donors. Popular NFT artist Pplpleasr, for example, used the Endaoment platform to donate the proceeds from her art to the Stand with Asians Community Fund. Together, Endaoment and The Giving Block alone saw nearly $20 million in combined NFT donations on their platforms, according to both companies’ annual reports.

NFTs in particular have the potential to unlock long-term donation streams for nonprofits. Solana-based NFT marketplace Metaplex allows creators on its platform to support charities with recurring royalty payments through their NFT sales through an integration with donation API startup Change.

“This is about creator utility, not traditional philanthropy. The smart contract technology allows impact to live in the product itself, and then give in perpetuity,” Nigam said.

“We’ll see NFT collections go live, and they’ll set a goal, [for example] that of all secondary sales, 2% goes to combating climate change for life. Now, on every single resale, the creator’s initial intent is never lost, which is what gets them really excited. And for nonprofits, unlocking recurring channels for giving is always the number one goal.”

Although crypto donations have been gaining traction for the past year, the quick mobilization of funds to support Ukraine this month, in particular, could be a catalyst for the crypto community to support other causes. 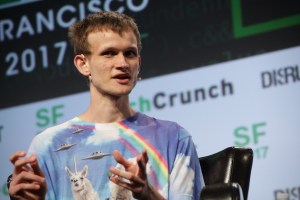 “I think a lot of people who are really core to [the blockchain and crypto space] are in the space because they want to support freedom, support more democratic ways of organizing, and generally support people’s ability to basically, peacefully have their own personal and financial lives,” Buterin said.

Watching these rights be violated in Ukraine has galvanized the crypto community’s attention, he said, attributing some of the heightened awareness to the fact that many individuals working on prominent crypto projects are Ukrainian themselves.

The success of crypto donation campaigns to support Ukraine has demonstrated that crypto can be “a very good medium for very quickly pulling funds together,” Buterin added.