February saw a noticeable shift between inflation and U.S. Federal Reserve news, followed by news of a conflict in Eastern Europe that completely overshadowed the earlier concerns of economic health. What’s transpiring in Ukraine is causing an immediate marketwide price drop. Bitcoin (BTC) had a notable decline of 11% over a 16-hour time period, while the majority of altcoins plummeted 20% or more.

The initial expectation was for the war to have a negative impact on cryptocurrency prices, which it did for a short period of time. However, as fear set in, prices quickly ramped up.

But the short sample size of days thus far has indicated there are reasons to believe that the crisis can have a positive effect on BTC and altcoins, just like was seen in March 2020, with the mainstream COVID consciousness.

Sentiment is often a good gauge to figure out what the trading crowd expects to happen next. Over the past month, the crowd sentiment as a leading indicator was extremely effective. 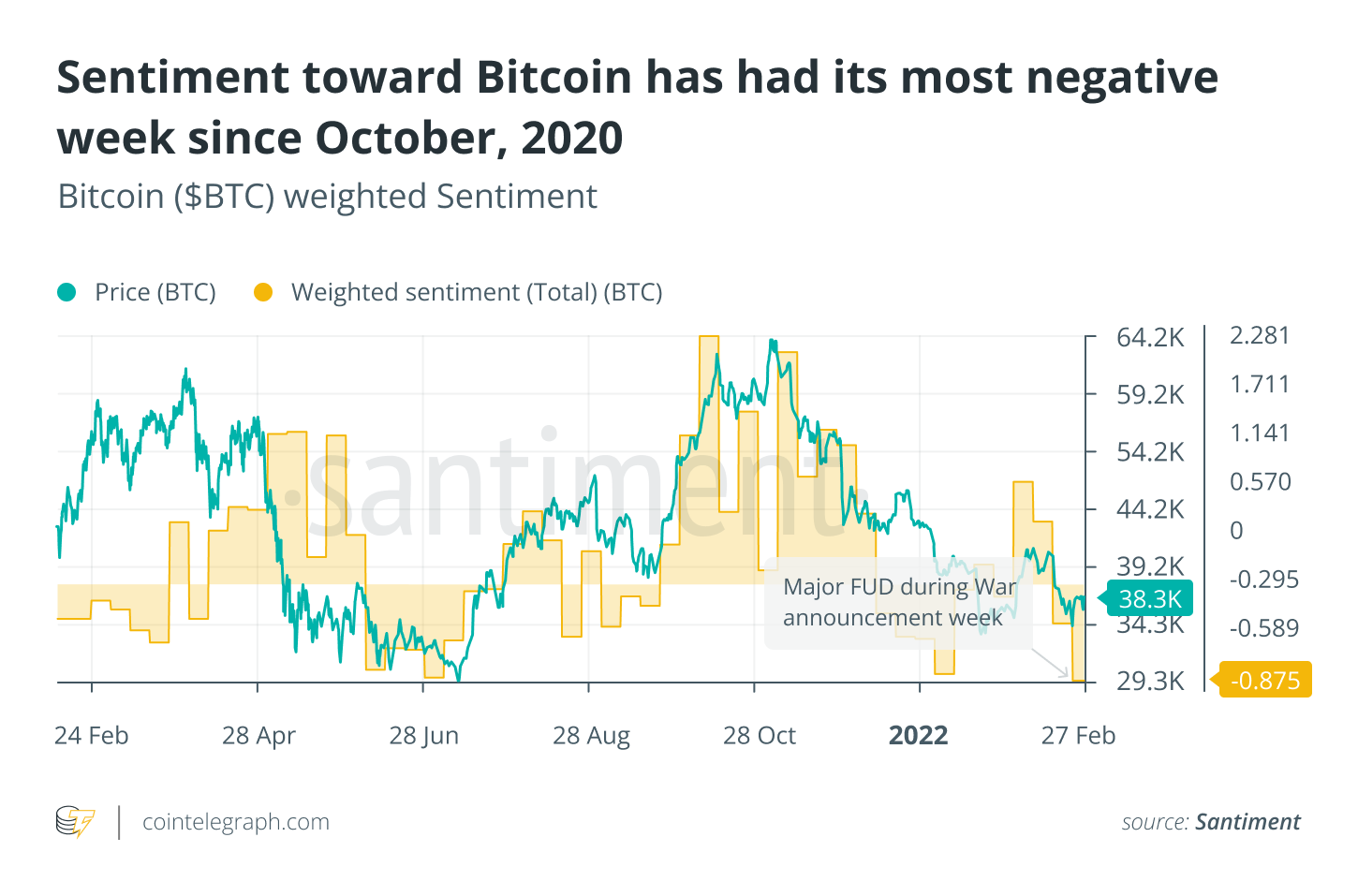 On the tail end of Fed and inflation discussions in early February, cryptocurrency prices rose sharply, peaking by the middle of the month as Bitcoin topped $45,000 before a steep correction. FUD was the overarching theme when the war broke in late February, but the sentiment improved as prices recovered quickly, causing many to speculate that prices dropping was nothing more than a “dead cat bounce.”

Now, traders have entirely switched back into being mildly bullish toward Bitcoin. It’s important to mention that cryptocurrencies could be especially volatile as they currently cling to the rapid developments of the European crisis.

30-day price returns all over the map

The case for being a Bitcoin maximalist was very much on display over the past month of volatility. Yes, there were many projects such as Terra (LUNA), XRP and Shiba Inu (SHIB), among many others, that came out ahead of BTC in terms of percentage market cap gained.

But Bitcoin’s ability to not have relatively volatile slides compared to virtually all other cryptocurrency counterparts, as well as actually leading the recovery charge for portions of the past month, is why Bitcoin hodlers sat pretty.

Stablecoins, such as Tether (USDT) — particularly with how large addresses are accumulating or selling their holdings — have increasingly become a good bellwether in this regard. 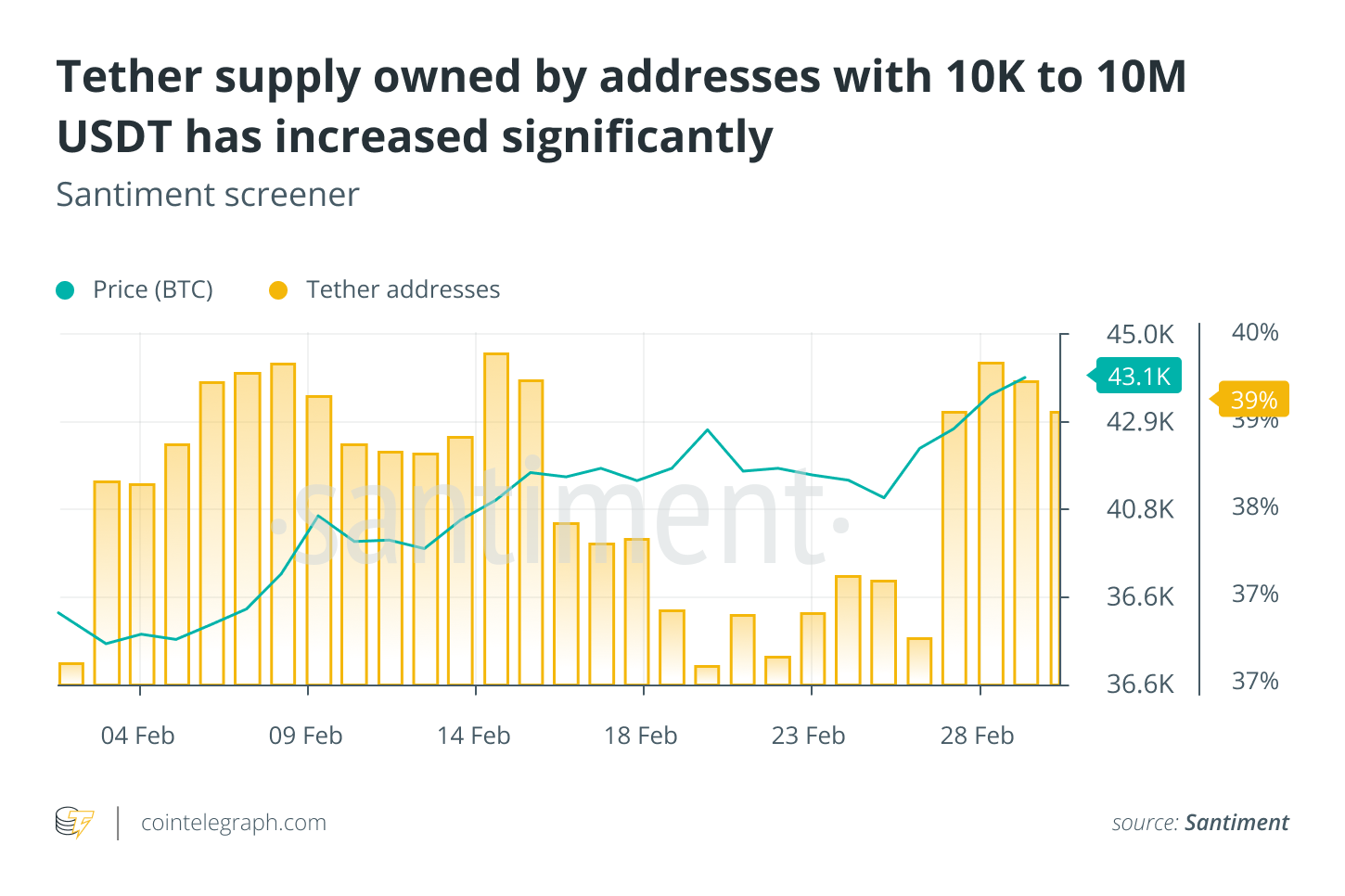 There has been a steady rise in the proportion of USDT’s supply that is held by addresses with 10,000–1 million USDT, which actually totaled over $1 billion in February. Typically, the amount is maxed at 1 million because beyond this threshold, many exchange addresses can be found, which are not accounted for. Regardless, based on what is seen, there is clear evidence that sharks and whales have significantly more USDT ready to purchase cryptocurrencies compared to a month ago.

Bitcoin whales appear to be in a slight decline/holding pattern 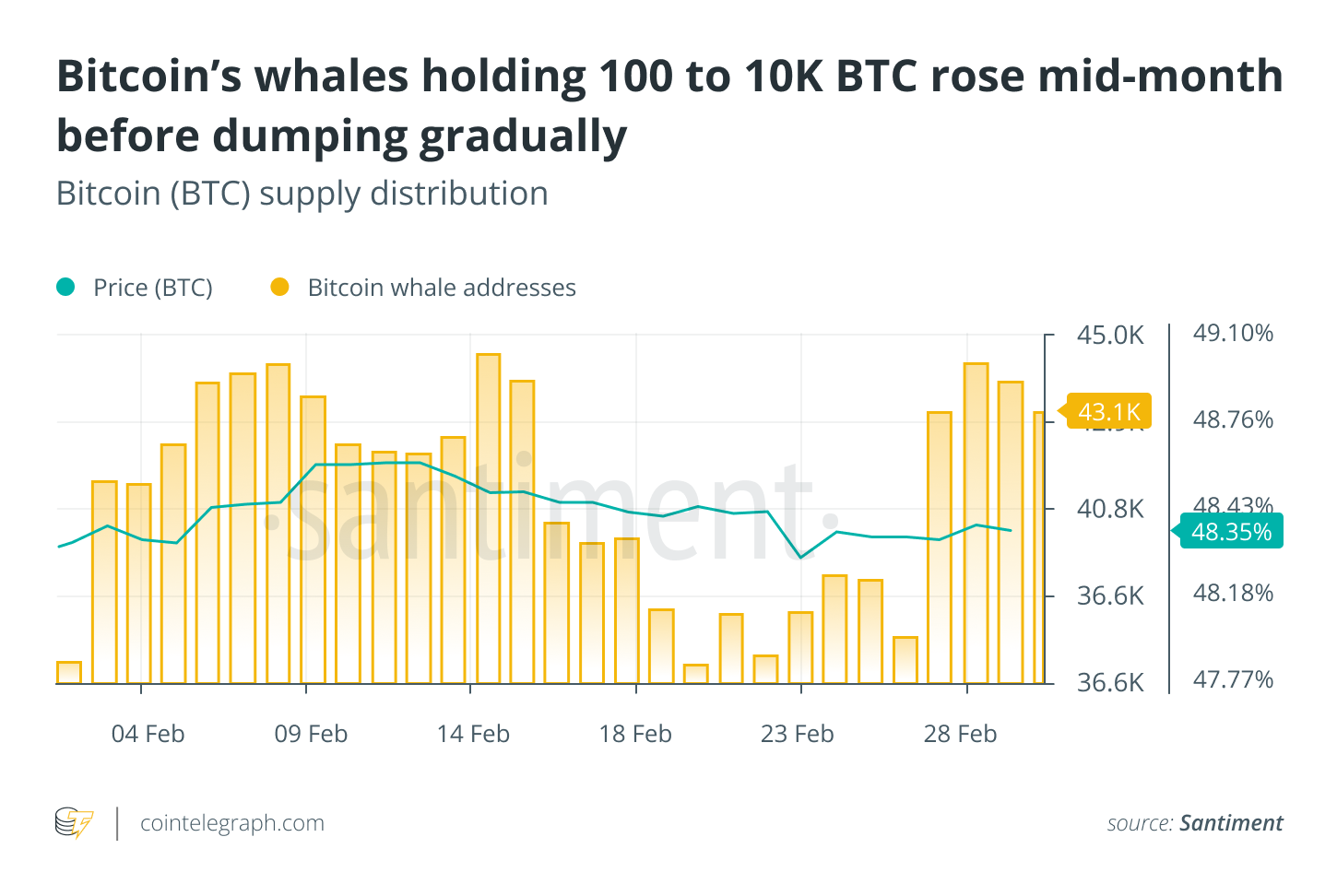 Any sign of this group of addresses showing notable accumulation would be a great sign that FUD is dissipating from the key group of stakeholders that can start or stop a bull run at a moment’s notice.

The Santiment Network Value to Transactions Ratio (NVT) model measures the amount of unique BTC circulating on the network, then calculates whether that output is above, on par, or below the expected amount of circulation to justify Bitcoin’s current market cap.

For now, the amount of unique BTC circulating on its respective network looks quite promising. Since October 2021, this model has flashed a semi-bullish sign, indicating that the amount of utility Bitcoin is seeing is justifying that its market cap would normalize at a slightly higher level than it’s currently sitting. March is just getting started, but it’s off to a good start with a bullish signal on a very small sample size of days recorded.

Bitcoin’s cumulative supply sitting on exchanges has continued its encouraging slide downward, reaching 10.76%. This is the lowest ratio of BTC supply on exchanges since November 2018. Generally, this continued decline implies a decreased risk of future sell-offs. 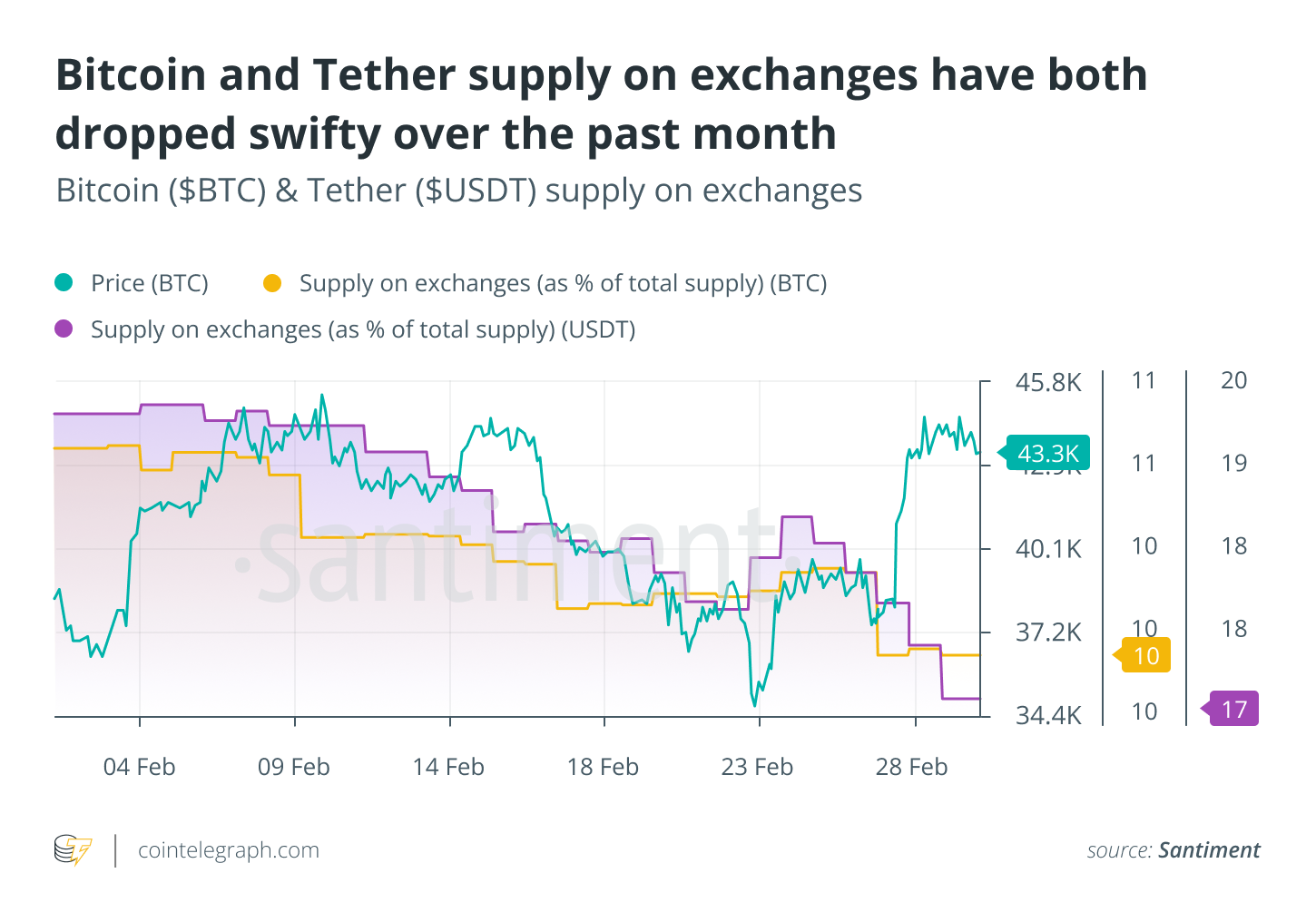 Meanwhile, the supply of Tether on exchanges is decreasing, which is less encouraging to see. More USDT on exchanges generally implies upcoming plans of cryptocurrency purchases, though it can occasionally be for the purposes of transferring to fiat and cashing out. But for now, attention should be given to a rise in this metric, especially while it’s matching the USDT accumulation of large addresses.

Another interesting development has been Bitcoin’s network realized profit/loss. When the war news broke and prices plummeted, this metric dropped to its lowest level since late January. Typically, these large negative spikes are indicative of price bottoms forming. This is due to the fact that the network is trading at a loss at the time and usually requires a price rise to neutralize and find a balance. 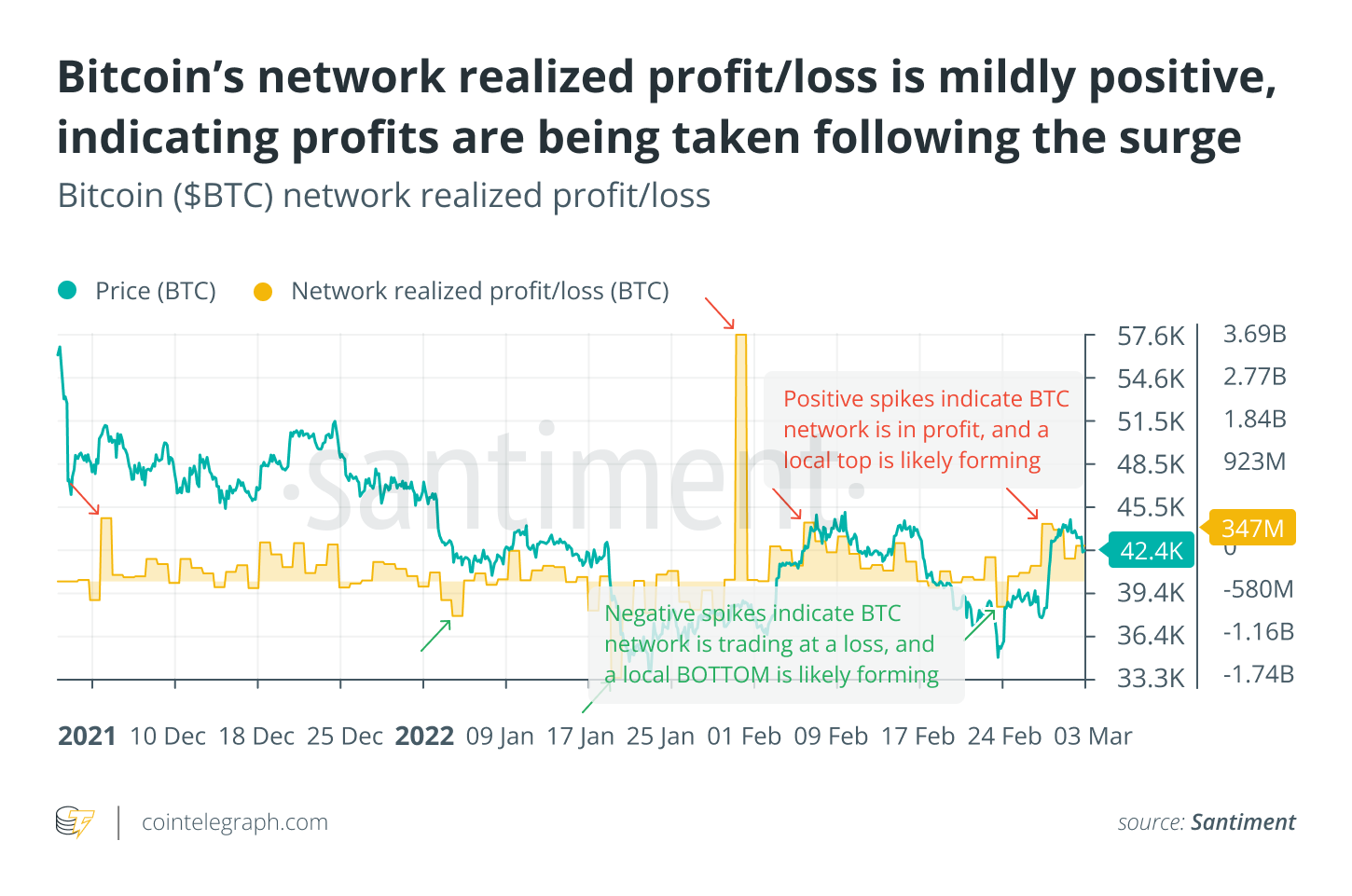 Following the rise in price after the initial FUD from the first day, BTC’s network realized profit/loss very rapidly shifted to the most positive it has been since late January. With the network trading highly in profit once it nearly scraped $45,000, a local top formed, and prices have dropped back down mildly at the time of this writing.

Cointelegraph’s Market Insights Newsletter shares our knowledge on the fundamentals that move the digital asset market. This analysis was prepared by leading analytics provider Santiment, a market intelligence platform that provides on-chain, social media and development information on 2,000+ cryptocurrencies.