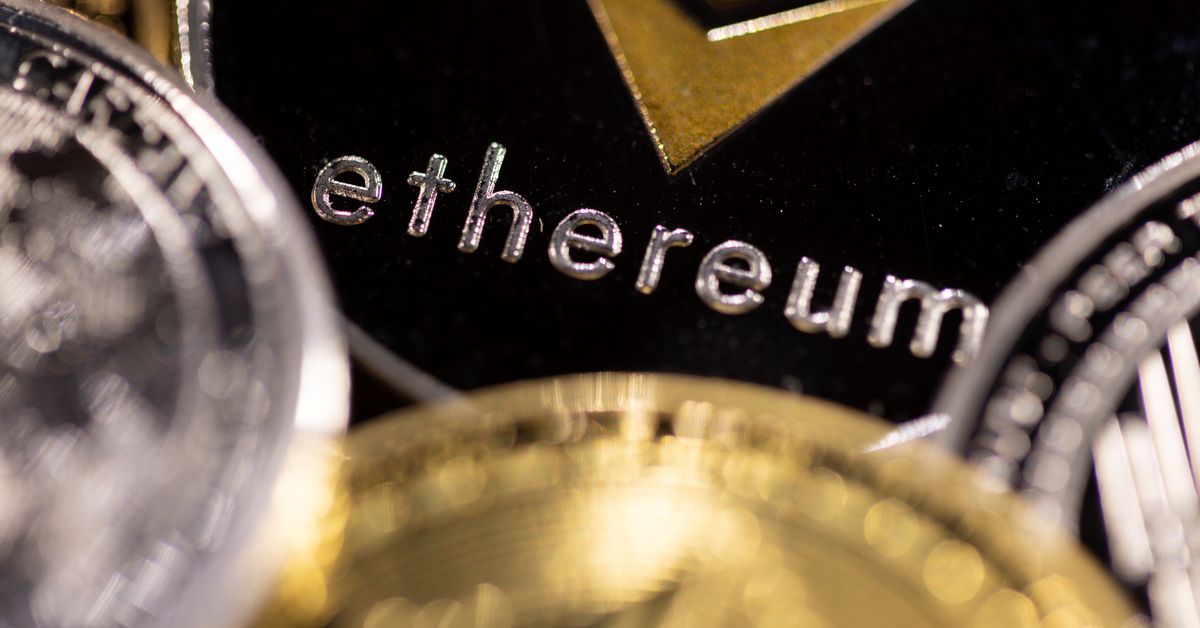 Representation of Ethereum, with its native cryptocurrency ether, is seen in this illustration taken November 29, 2021. REUTERS/Dado Ruvic/Illustration

Dec 12 (Reuters) – Most big banks and investment managers expect the cryptocurrency market to pick up in 2023 after a brutal year that saw bitcoin sink around 75% from its all-time high in November last year.

The collapse of cryptocurrency exchange FTX – the latest in a series of liquidity squeezes and bankruptcy filings that have shaken investors – has underscored the need for more regulations in the highly speculative sector.

Ethereum and projects focused on real world functionalities and utility are expected to drive the next leg of growth.

Following are some comments from banks and investment managers:

“Although investors have suffered significant losses, we believe this second ‘crypto winter’ will be a net positive because the FTX collapse will edge the crypto ecosystem closer to the established financial sector.”

“The FTX crash spotlighted well-known structural issues in the crypto ecosystem: insufficient reserves, conflict of interest, a lack of regulation and transparency, and unreliable data.”

“Market concentration (in crypto exchanges) is greater than ever, with Binance being the biggest winner.”

“Crypto does not yet pose a systemic contagion threat to traditional assets.”

“We believe that the Ethereum Merge and really the Ethereum Surge could be a big factor in terms of increasing the use-cases for blockchain into new areas, including financial services,” analysts said in an early December note.

The Ethereum Merge was a major software upgrade to the Ethereum blockchain that went live in September and reduced its energy usage by 99.95%, according to developers. The Surge, another anticipated upgrade, is seen reducing costs to make the ethereum network safer and process transactions faster.

“We continue to see the Ethereum Surge as a catalyst for development in the cryptocurrency markets, which appears at least 6-12 months away.”

“An increased urgency for regulation may enable greater institutional engagement, and a shift in focus and capital from speculative trading to projects with real-world functionality, and companies with roadmaps to profitability may accelerate industry maturity,” analysts said in a note.

“Our view is that we remain in the first innings of a major change in applications that will take place over the next 30 years.”

“While the FTX crisis appears to be peaking, asymmetrical responses of mining to prices may weaken the market headwind: now less sensitive to the downside while more to the upside,” economists said in a note.

“From the China crackdown to the several price crashes in earlier 2022, crypto mining has shown an approximately 1-to-1 price-power relationship. Along with the Ethereum Merge, this elasticity tends to shrink on the negative side while expanding on the positive side: most recently, the 6% price rebound in early-September was followed by a 19% Bitcoin power demand rebound in early-October (more than 1-to-3).”

“Still too short history to verify the change, but we could see the possibility of some immunity to the current price crash in the middle of the FTX crisis and to potential stricter scrutiny from regulators in the coming months.”

“BTC and ETH futures volumes and open interest … now seem to be stabilizing. This coincides with implied volatilities falling back in line with realized,” strategists said a note.

“Normalization is evident from the fact that outflows from centralised exchanges have eased. And the wrapped bitcoin (wBTC) discount has largely reverted after widening to as much as 1.5%.”

As with most other banks, UBS is pessimistic regarding the near-term future.

“Regulation looms to the extent that we don’t see any near-term positive catalyst for a strong recovery.”

“With bitcoin mining largely unprofitable given recent higher electricity prices and lower Bitcoin prices, we predict that many miners will restructure or merge as they look for fresh capital.”

They added that an end to the war in Ukraine might reverse some of the policies aimed at curbing inflation and make Bitcoin mining more politically palatable.

“Institutions will employ blockchains to simplify custody and settlement, while reducing costs for customers.”

“Our predicted winners are Ethereum, Polygon, Avalanche, Polkadot and Cosmos.”

“With persistent inflation and a young population, Latin America is seeing the fastest crypto and stablecoin adoption in the world. Tokenization of sovereign debt may begin in Brazil first.”

In their “surprise” scenario for 2023, Standard Chartered forecasts Bitcoin falling to $5,000 if the current collapse spreads.

“Demand for bitcoin should continue to grow regardless of market conditions as it is still better than most currencies in that it at least has a good chance of going up eventually, whereas most currencies are just going to depreciate over time.”

Norwood expects the crypto market to pick up in about six months.

“I think that’s going to have to come from real world adoption by retail users who are not buying crypto to gamble on new tokens, but rather who need to exit their local Fiat currency.”