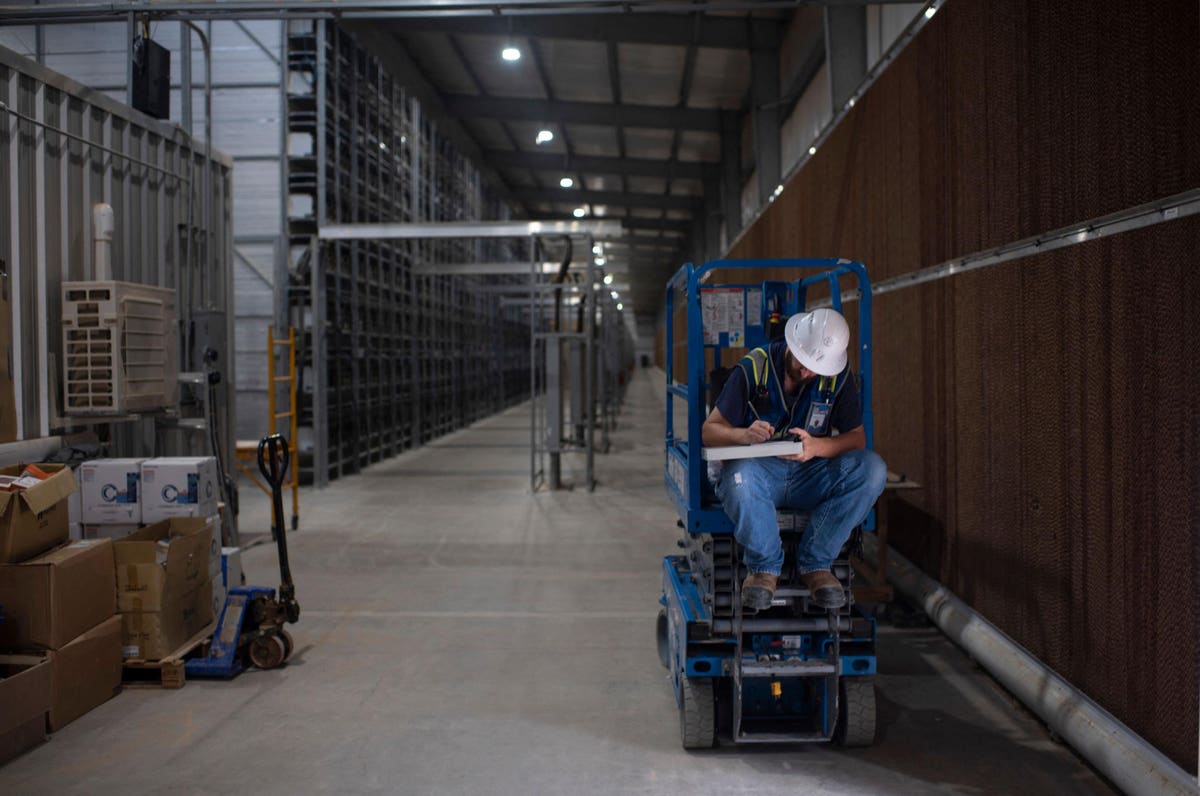 The pandemic upped demand for digital currency in China, as elsewhere. But in June, authorities banned crypto mining. This has put China firmly into the camp of using digital currency to increase government monitoring. Are crypto and digital in competition?

No. China dislikes the energy consumption and greenhouse gases associated with crypto-currency mining. Regulators also think, with good reason, that crypto currency is used for money laundering, capital flight, and illegal transactions, so why support it?

A worker fills out a form at the Whinstone US Bitcoin mining facility in Rockdale, Texas, on October … [+] 10, 2021. – The long sheds at North America’s largest bitcoin mine look endless in the Texas sun, packed with the type of machines that have helped the US to become the new global hub for the digital currency. The operation in the quiet town of Rockdale was part of an already bustling US business — now boosted by Beijing’s intensified crypto crackdown that has pushed the industry west. Experts say rule of law and cheap electricity in the US are a draw for bitcoin miners, whose energy-gulping computers race to unlock units of the currency. “There’s a lot of competitors coming into Texas because they are seeing the same thing (as) when we came here,” said Chad Everett Harris, CEO of miner Whinstone, which operates the Rockdale site owned by US company Riot Blockchain. (Photo by Mark Felix / AFP) (Photo by MARK FELIX/AFP /AFP via Getty Images)

What they are actively supporting is their own Digital Currency Electronic Payment (DCEP) system, completely different from crypto. The DCEP is a digital form of China’s fiat money, subject to the same PBOC issuance and design regulations that govern physical currency. The goal of the DCEP is to provide high transparency into transactions for the government, in other words, to let Chinese regulators know everything about people who are making purchases and sales. Currency intended to enhance the panopticon is pretty much the exact opposite of the goal of Bitcoin.

The DCEP is centralized and, since it is just a digital form of the Renminbi, it is stable and not, like crypto currencies, a speculative asset. The DCEP is the opposite of transformative: it is designed to increase the government’s grip. It will not impact international payment systems like SWIFT, because China’s fundamental obstacle, the non-convertibility of the Renminbi, remains.

As for China and blockchain, which is yet another issue, authorities have waffled on how much to support blockchain and in the end have come out with their own “fork,” which they still term blockchain. They worry that blockchain as a decentralized system enables dissident views and illegal payments. To remedy this, authorities have pushed forward with a centralized, government-controlled version of the blockchain for China. The blockchain-based service network (BSN), launched in 2019, differs from blockchain as we know it in that it is “permissioned” and transparent to government authorities. It enables the government to reverse transactions. Ultimately, China hopes that BSN will replace SWIFT as a more secure version way to make international payments.

Largely because of China, crypto mining has had a tough year, and lots of people make the mistake of seeing the regulatory crackdown as competitive behavior. In June, there was the China ban on crypto mining, and now there is chaos in Kazakhstan – one of the top destinations for miners moving out of China. A good chunk of the mining network has picked up and moved. Now the U.S. is the top destination for crypto mining, with about 43% of global hashrate, according to the Cambridge Center for Alternative Finance.

ALMATY, KAZAKHSTAN JANUARY 10, 2022: A view of the mayor’s office building damaged in mass riots. A … [+] rise in fuel prices sparked protests in the towns of Zhanaozen and Aktau in western Kazakhstan on January 2 and spread rapidly across the country. On January 5, President Tokayev dismissed the cabinet and declared a two-week state of emergency in the Mangistau and Almaty regions as well as in the cities of Almaty and Nur-Sultan. On January 6, a counterterrorism operation to stop mass unrest began. Valery Sharifulin/TASS (Photo by Valery SharifulinTASS via Getty Images)

Pandemic stimulus played a role in luring mining to the U.S. Stimulus spending prompted capital deployment – construction of big data centers and purchase of mining rigs – that made it easy for Chinese mines to move to the U.S.

The mining goes to places that have orphaned electricity, like, for example, Rockdale, Texas. With millions of tons of lignite coal, that town successfully bid in the 1950s for an Alcoa AA plant. Smelting aluminum is a huge drain on electricity, and doing it efficiently requires massive resources of cheap energy. Alcoa shuttered the smelter in 2008, and Rockdale, a decade later, managed to find the Bitcoin business to suck up some of that cheap electricity.

So now China is out of the mining business, at least officially. There remain quite a few mines directly tethered to power sources like hydropower generators, so that they don’t appear on the electric grid.

Ultimately, China’s official hostility does not threaten the mining business overall. China’s DCEP does pose a threat to Tencent and Alibaba, owners of the country’s largest digital wallets, WeChat Pay and Alipay. DCEP does not directly compete – WeChat Pay and Alipay are wallets, while the DCEP is currency that you put in the wallet. But you have to persuade people to get some DCEP rather than traditionally formatted Renminbi, and to do that, the government will use incentives like utility bill discounts and cash rewards. That puts competitive pressure on Alibaba and Tencent to push down fees, which are already much lower than in the West. Wider promulgation of DCEP is also likely to require cross-platform use (so that Alibaba will have to accept payment from Tencent wallets and WeChat from Alipay).

The digital Renminbi, like the Social Credit system, is just one more means of control.

UKRAINE – 2022/01/04: In this photo illustration, the Bitcoin cryptocurrency logo is seen on a … [+] smartphone screen and People’s Bank of China (PBoC) logo in the background. (Photo Illustration by Pavlo Gonchar/SOPA Images/LightRocket via Getty Images)