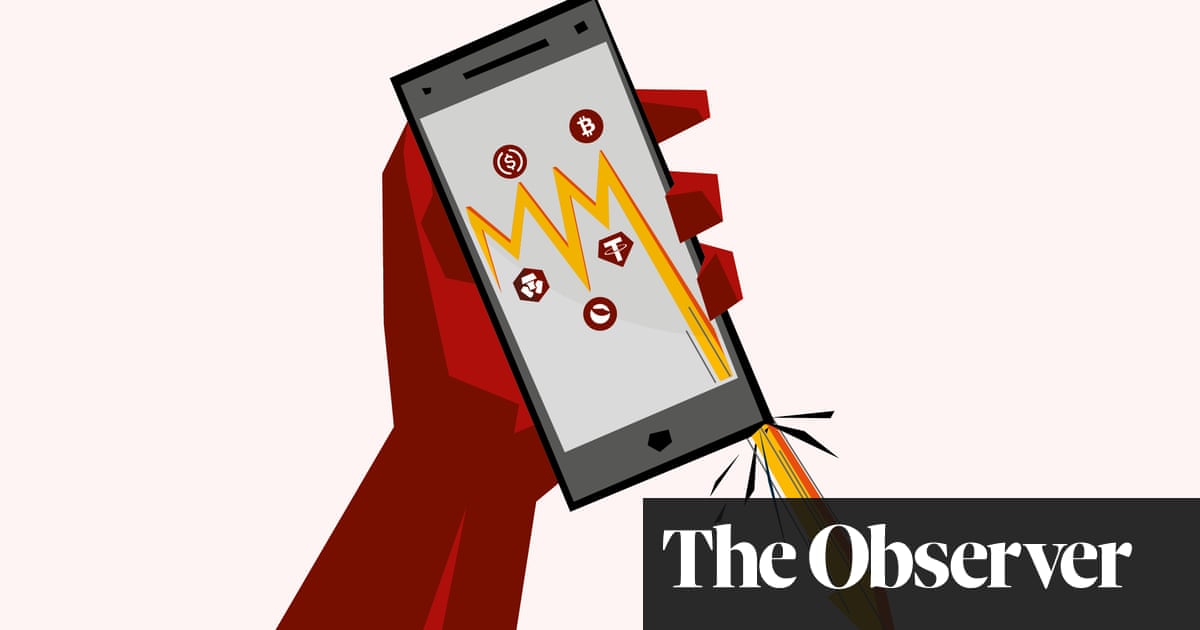 Even if you don’t live and breathe cryptocurrency, you’ve probably noticed some turmoil in the sector. Eye-catching headlines about missing apes and collapsing stablecoins are indicative of the chaos, but what’s really going on?

How did the crypto market unravel?

Like so many things: gradually, then all at once. Take bitcoin, the original cryptocurrency, which is responsible for about a third of the value of the sector. The cost of a single bitcoin has been dropping slowly since the end of March, alongside a broader malaise in the technology sector.

That makes sense: an investment in bitcoin is, in one regard, a bet on the possibility of further technological upheaval, just like the purchase of any other tech stock. With a rise in inflation choking off post-pandemic growth on both sides of the Atlantic, coupled with a vague sense that irrational exuberance had led to an overvaluing of tech in general over the past couple of years, the whole sector began dropping.

And then, in early May, the dam broke. In a week, it dropped further than it had in the preceding month. The immediate cause was contagion from the catastrophic failure of another cryptocurrency project, called terra, which was once valued at more than $50bn and ended the week effectively worthless.

As terra collapsed, so too did other cryptocurrencies. First, similar projects saw their values stumble, as investors feared they would follow; then, the panic gripped the broader sector, and even comparatively blue-chip tokens, including bitcoin itself, tumbled.

It took until mid-May for the crash to stop, but while the market has regained some stability, it shows no sign of returning to anywhere near its highs of last month. We may be, in the words of one chief executive, heading into a “crypto winter”. And that’s the optimistic view from within the sector: the pessimists fear that this is the beginning of the end.

Was that decline related to the turmoil in the regular economy?

Probably. Tech stocks in general have been crushed in recent months, with high inflation undercutting the appeal of high-growth, low-profit investments and a series of punishing revelations from the largest companies raising fundamental questions about the limits to their potential expansion.

Bitcoin fans may promote an image of their currency as a sort of “digital gold”, with a limited supply that makes it function as an effective hedge against inflation. But in practice, when inflation rises, bitcoin tumbles, and as growth prospects diminish, so too does the opportunity for a digital revolution.

On top of that, the crypto economy seems disproportionally driven by retail investors, who treat the sector like a halfway house between conventional day-trading (already a spectacularly risky way of investing cash) and straightforward gambling. As rising costs bite, those investors may be forced to liquidate some of their holdings, pushing the sector even further into the red.

What happened to terra to make it crumble?

Terra was a project to make a “stablecoin”: a cryptocurrency token that has a fixed value of, typically, one US dollar.

Stablecoins are nothing new. Two of the most popular in the sector are called tether and USDC, and they function, effectively, as banks: people hand them money, and they receive stablecoins in return, which can at any point be cashed in for money again. This “reserve-backed” model has issues – specifically, that you have to trust the company behind the stablecoin to keep the money safe and easily accessible, and not put it all on red in Las Vegas in an attempt to make a quick profit with other people’s cash.

The biggest winners in all of this seem to be the corporate backers: venture-capital funds and successful startups

The problem is, the system only works if luna has any value at all. For a while, it did, thanks to an aggressive offer to pay 20% interest on savings held using the currency. And then, in the middle of the crash, as investors started to pull their money out to cover losses elsewhere… it suddenly didn’t. That triggered what is called a “death spiral”, as investors turned terra into luna, which lowered the price of luna, which meant that the next redemption lowered the price of luna further, and so on. In a few weeks, the value of the luna coin fell from $80 to around one thousandth of a cent. The experiment was over. 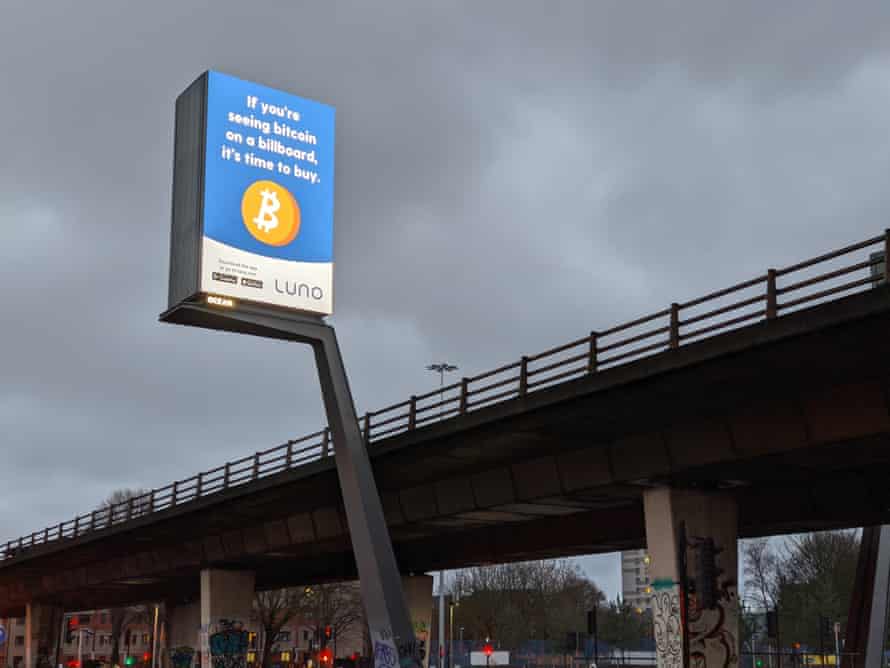 An old financial adage says that when cab drivers start talking about stocks, it’s time to sell. This was recast into a plucky marketing message by crypto exchange Luno early last year. Photograph: John B Hewitt/Shutterstock

Who are the winners and losers?

At one level, the answer is simple: the winners are people who sold their cryptocurrency holdings in early April, and the losers are the people who they sold them to. It’s a common enough occurrence in the sector that there’s even a rallying cry for the ones left standing when the music stops: “HODL” (Hold On for Dear Life) – an implicit promise that the boom times will come round again and only those who don’t panic and sell at the bottom will make a profit in the next phase of the cycle.

But there are distinctions. Those who held blue-chip cryptocurrencies such as bitcoin and ethereum have only lost about half their value from the peak, while those who bought “shitcoins” – low-effort projects where almost everyone involved acknowledges that the goal is simply to buy low, sell high, and leave someone else picking up the pieces – have lost a lot more. Similarly, those who managed to cash out into one of the stablecoins that survived the turmoil are in almost as good a position as those who managed to turn their crypto into cash.

The same holds true in other sectors of the economy: if you bought a “Bored Ape” NFT at the peak of the market, you might have trouble selling it for exactly what you paid for it, but it’s still pretty easy to resell it for more than £100,000. Not so if you bought, say, a screenshot of Jack Dorsey’s first tweet on Twitter, bought at $2.9m, now failing to sell for $14,000.

But the biggest winners in all of this seem to be the corporate backers of the sector: venture-capital funds such as Andreessen Horowitz and the successful startups that have spawned repeated boom/bust cycles. The only thing better than buying low and selling high, after all, is giving yourself the ability to print for free the thing that everyone else is trying to buy.

Does this mean the underlying technology is flawed too?

Everything in the cryptocurrency sector relies on a few shared innovations, chiefly the concept of a blockchain – a decentralised ledger that tracks ownership of digital assets without handing control of the network to any one individual or organisation.

Other common aspects include “proof of work”, a way of securing a blockchain by requiring huge amounts of energy to be burned every second in order to economically dissuade attackers from trying the break the system, and the use of cryptographic “wallets”, enabling assets to be held in a way that prevents any transactions without the secret key of the account holder.

All of those technologies have come under criticism in their own ways. Proof of work, for instance, is responsible for the astonishing carbon footprint of the bitcoin network, equivalent to that of the entire nation of Thailand, while the blockchain itself functions as little more a tremendously slow and inefficient database for any instance in which decentralisation isn’t the main advantage.

But these technologies remain incredibly powerful in some scenarios. Any situation where a government might try to stop economic activity, for instance, becomes much harder to enforce when there’s no centralised body to enforce the rules. That could include activists trying to receive funding to promote democracy in countries with strong capital controls – but also ransomware vendors extorting payments from schools and hospitals from nations without extradition agreements. 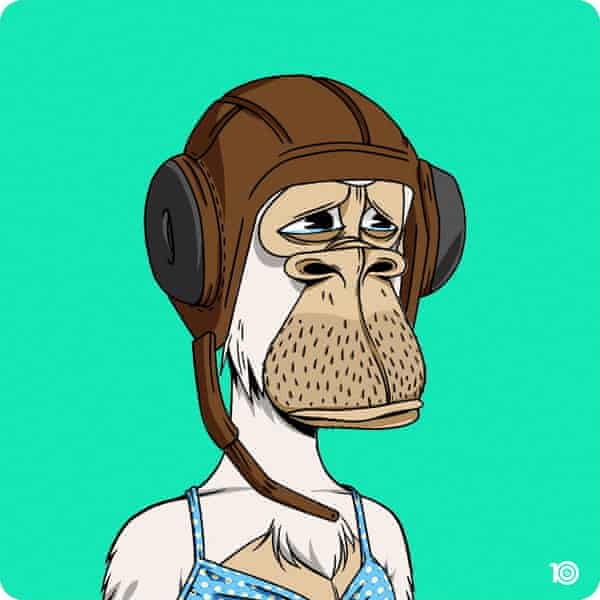 Bored Ape NFTs – collectible digital artefacts – are traded using the ether cryptocurrency. This one was purchased by 10:22PM, part of Universal Music, to be the manager of a virtual band. Photograph: 10:22M/Reuters

Will the crypto crash have any ramifications for conventional financial institutions?

Thankfully, it currently looks unlikely. Conventional financial institutions have largely kept clear of the crypto sector, and when they have touched it, have treated it as an appropriately high-risk investment opportunity. Even if the entire sector disappeared overnight, the avenues of contagion would be limited: the knock-on effect would have a huge hit on some conventional stocks, and investors in venture capital funds such as Andreessen Horowitz’s recent $4.5bn round of investment in cryptocurrency companies would be wiped out, but systemic effects would be unlikely.

But the crypto economy is still valued at more than $1tn, and that much wealth doesn’t disappear without causing serious pain in the real world, even if it doesn’t lead to a Lehman Brothers-style moment of banks failing. It could cause, or exacerbate, a recession, or spark a further wave of more conventional problems such as mortgage foreclosures, bankruptcies and insolvencies.

Could cryptocurrencies bounce back?

The cryptocurrency sector has survived catastrophic crashes before. That’s what sparked the latest conversation about us entering a “crypto winter”: yes, it’s bad, but winter comes before spring. The hope is that investors just need to sit this one out and wait for the market to thaw.

If there’s reason for pessimism, it’s that this time could be different. Crypto has generally grown through finding ever larger pools of new customers. But this latest bust might be so huge, and so widespread, that there are few new customers to find. And eventually, people who hold their savings in crypto will need to sell in order to pay bills in the real world, and won’t be able to find anyone to sell to. If everyone in the developed world either lost money in the crypto crash, or knows someone who did, the pool of naive cash to buy in next time around will be shallow indeed.

But in the meantime, the work on building consumer products continues. Maybe someone will have built a “play to earn” game that is actually fun, or an NFT that millions want to own. Either way, the clock is ticking.