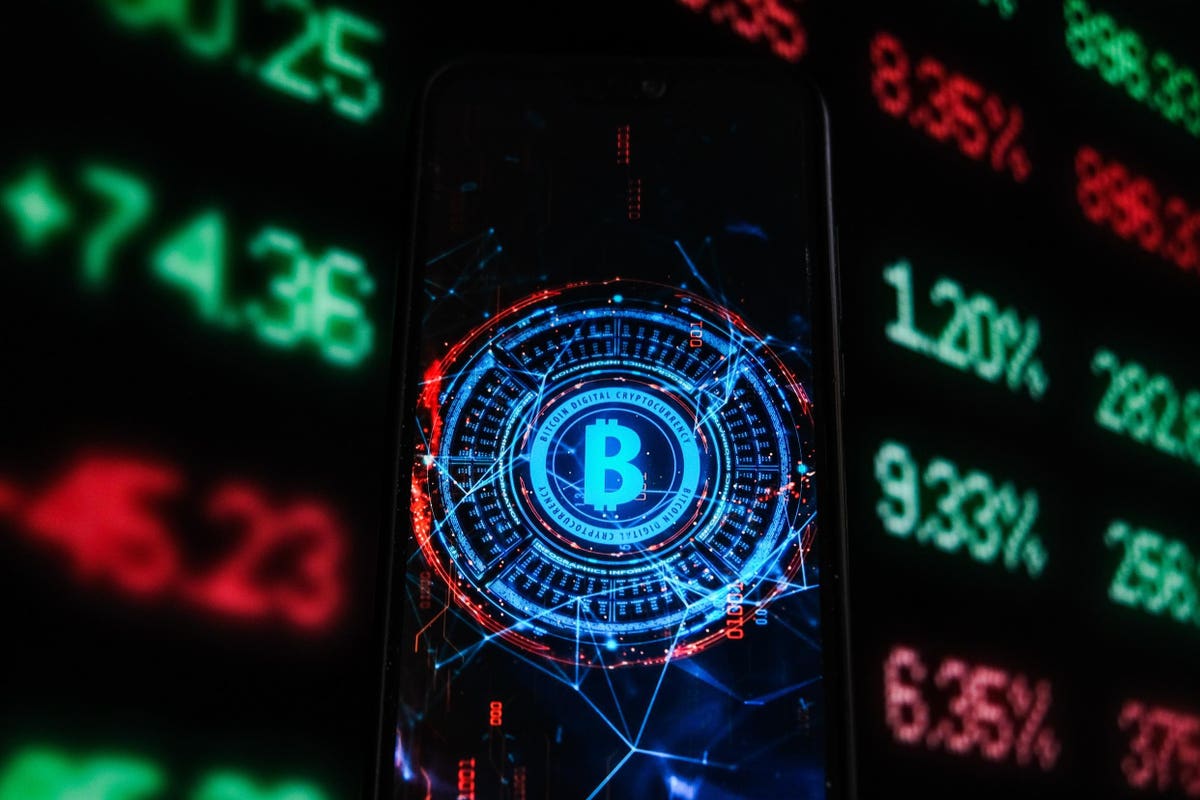 Bitcoin, ethereum and cryptocurrency prices have swung wildly over the last week as Russia’s invasion of Ukraine sends shockwaves through global markets—adding to fears of a “cataclysmic market shift.”

The bitcoin price fell under $35,000 per bitcoin this week before rebounding sharply. Ethereum and other major cryptocurrencies have been equally as volatile as “extreme fear” grips investors.

Now, traders are braced for severe gyrations after Russia was kicked off the world’s main international payments network SWIFT, with a former Russian Central Bank deputy chairman warning of “catastrophe” on the Russian currency market.

Want to stay ahead of the bear market? Sign up now for the free CryptoCodex—A daily newsletter for the crypto-curious

The bitcoin price has fallen sharply in recent months with the Russia invasion of Ukraine causing … [+] further volatility for bitcoin, ethereum and other cryptocurrencies.

“It means there is going to be a catastrophe on the Russian currency market on Monday,” Sergei Aleksashenko told Reuters. “I think they will stop trading and then the exchange rate will be fixed at an artificial level just like in Soviet times.”

On Saturday, the U.S., the E.U., the U.K., France, Germany, Italy, and Canada announced in a joint statement they would penalize Russia’s central bank and exclude some Russian banks from the SWIFT messaging system, used for trillions of dollars worth of transactions around the world, and designed to “prevent the Russian Central Bank from deploying its international reserves in ways that undermine the impact of our sanctions.”

It’s thought Russia holds about $300 billion of foreign currency offshore—enough to disrupt money markets if it’s frozen by sanctions or moved suddenly to avoid them, according to a Credit Suisse report reported by Bloomberg.

Bitcoin, ethereum and crypto prices had recovered along with stock markets toward the end of this week as traders came to terms with Russian sanctions. However, it’s thought the latest measures could trigger fresh volatility, with soaring commodity prices and inflation fears rattling investors in recent weeks.

Bitcoin’s extreme price volatility at a time when the gold price has climbed has undermined the popular narrative that bitcoin has begun acting as digital gold, a so-called safe-haven asset that investors flee to in times of perceived risk—though some bitcoin and crypto investors remain confident.

“In contrast to major stock indices, bitcoin hasn’t actually recorded a lower low [this week],” Mikkel Morch, executive director at digital asset Fund ARK36, wrote in an emailed note. “This small detail could be of great significance in terms of the talk around bitcoin as a safe haven asset.”

Despite the bitcoin, ethereum and crypto price recovery, fears persist that the bitcoin price could fall back again.

“The situation is still volatile and the $40,000 levels are still the resistance,” Morch added. “Unless bitcoin meaningfully breaks this barrier, revisiting the range lows or even the $30,000 support is still very much on the table in the short term.”

“If the situation in Ukraine escalates even more bitcoin may fall below $30,000 as investors leave for defensive assets,” Alex Kuptsikevich, senior financial analyst at FxPro, said in emailed comments, pointing to reports Russia could use cryptocurrency to circumvent sanctions. “Otherwise, the country will not survive the growing sanctions pressure from Western countries.”

Sign up now for CryptoCodex—A free, daily newsletter for the crypto-curious

The bitcoin price fell to lows not seen since a major crypto crash last month as fears mount over … [+] the knock-on effects of Russia’s invasion of Ukraine. Ethereum and other cryptocurrencies have also swung wildly.

However, others in the bitcoin and crypto community think its unlikely bitcoin could be used by Russia to evade global sanctions.

“The suggestion that Russia could use bitcoin to evade sanctions is mostly an exaggeration by the media,” Cory Klippsten, the chief executive of bitcoin-buying app Swan Bitcoin, said via Telegram.

“Technically, Russia could use bitcoin given its permissionless, open nature, but there are methods for agencies to trace bitcoin transactions. It’s important to note that bitcoin is a technology that can be accessed by anyone, no matter if you agree with their actions or not.”

Almost $14 million has so far been donated to the Ukrainian war effort through anonymous bitcoin donations, according to researchers at Elliptic, a blockchain analysis company.

“Across the globe, demand for bitcoin continues to increase as the need for a decentralized, censorship-resistant store of value becomes more evident by the day,” added Klippsten.