Bitcoin (CRYPTO:BTC), the biggest cryptocurrency on the market, has bitten the dust so far in the new year. So has the best-performing digital token in 2021, Shiba Inu (CRYPTO:SHIB).

It’s not their fault. Cryptocurrency prices, in general, have fallen significantly in recent days. But not all of them. Here are two cryptocurrencies that have trounced Bitcoin and Shiba Inu during the current crypto crash. 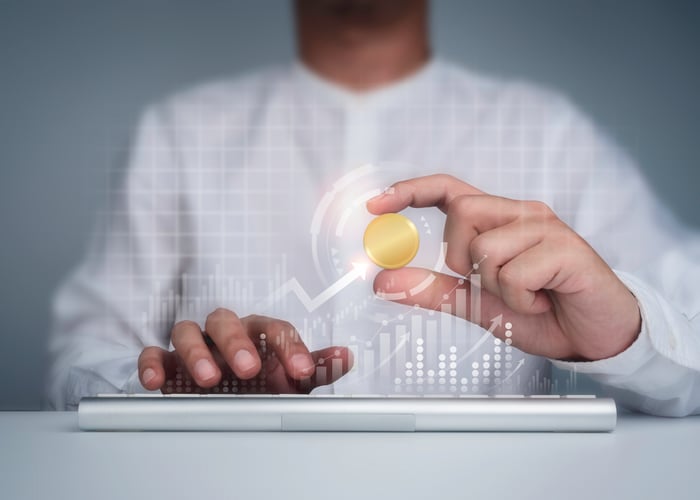 While Bitcoin and Shiba Inu have fallen so far this year, Chainlink (CRYPTO:LINK) has delivered an impressive year-to-date gain of close to 40%. It now ranks No. 16 on CoinMarketCap’s list of the top cryptocurrencies with a market cap of around $12.9 billion.

How has Chainlink been able to defy gravity with most other cryptocurrencies sinking? Some crypto whales deserve much of the credit. Crypto whales are investors who invest heavily in cryptocurrencies. Where they put their ample financial resources is a subject of intense scrutiny.

The Whale Stats website specifically tracks the top 1,000 crypto wallets on the Ethereum (CRYPTO:ETH) blockchain. Last week, the site reported that crypto whales were swimming toward Chainlink more than any other digital coin. That was all it took to provide a big boost to Chainlink’s price.

Why has Chainlink gained favor? Probably because it’s the leader in what are called oracle networks. Smart contracts are built on blockchains. However, they often need data from outside the blockchain ecosystem. Oracles enable smart contracts to access this external real-world data.

For example, Arbol developed a smart contract platform for farmers and other businesses to hedge against climate risks. This requires weather data from outside the blockchain. Arbol selected Chainlink to make it happen.

Chainlink could enjoy even wider adoption going forward thanks to the planned Ethereum 2.0 upgrade. Because Chainlink is built on the Ethereum blockchain, the transition from Ethereum to a proof-of-stake protocol could entice even more developers to use the Chainlink oracle network.

Internet Computer (CRYPTO:ICP) has emerged as another top winner so far in 2022. The cryptocurrency is up more than 30% year to date. It currently holds the No. 27 spot on CoinMarketCap’s ranking with a market cap of around $6.6 billion.

There isn’t any evidence that crypto whales have been pouring their money into Internet Computer as they have Chainlink. However, investors seem to be increasingly enamored with Internet Computer’s Web3 (or Web 3.0) opportunity. Internet Computer was one of the top 10 fastest-growing cryptocurrency ecosystems last year, according to Web3 venture firm Electric Capital.

If you’re not familiar with Web3, you can think of it as the third version of the internet where individuals instead of large corporations are in control. Web 1.0 was the initial internet of the 1990s. Web 2.0 came about later with companies such as Amazon.com, Facebook (now Meta Platforms), Google (now part of Alphabet), and Twitter dominating. The idea with Web3 is that you’ll be able to control your own data thanks to the power of blockchains.

Internet Computer was designed to enable the internet to host all kinds of smart contracts and decentralized finance (DeFi) applications. Unlike traditional blockchains, any device connected to the internet, including smartphones and smartwatches, can authenticate artifacts using Internet Computer.

Several projects in the Internet Computer ecosystems are already making the promise of Web3 a reality. For example, Fleek allows any web content to deploy on Web3. Distrikt is kind of a Web3 version of Microsoft’s LinkedIn.

If Web3 takes off as much as some expect it will, Internet Computer could keep up its winning ways. And it just might continue to trounce Bitcoin and Shiba Inu.

This article represents the opinion of the writer, who may disagree with the “official” recommendation position of a Motley Fool premium advisory service. We’re motley! Questioning an investing thesis — even one of our own — helps us all think critically about investing and make decisions that help us become smarter, happier, and richer.